When you spend hours and hours trialling out new ICT programs overcoming innumerable hurdles and finally see success on the horizon, only to discover (after submitting) that the fifth digital artefact that you attempted, in fact, did not work successfully after all. And it took how many times to record the script properly without giggles or surprise background noises like the cats fighting or the neighbours arguing?

Sums up my ICT experience on prac, Murphy’s Law rules supreme. With a new interactive IWB to play with there was much excitement (and trepidation). First no sound. Then no interactive capabilities. But finally on my second-last day the stylus decided to callilbrate and the children were able to practice their handwriting on the IWB. Such excitement! When they work the capabilities of these IWB are simply mind-blowing especially to my old brain. So much to grasp, so many new worlds to explore.

The joys of ICT in the classroom which can only be learned the hard way. Interactive learning games that work fine at home do not at school – school has blocked access, the url does not load, the game has limited time or number of attempts or one attempt only. Always, always, always have a Plan B that does not rely on technology (that includes the dvd player for a movement song when the disc gets stuck for a lesson on moving to music). Even when you have a list of websites to play an introductory video and not one of them loads up at the crucial moment. Even when google fails you on the spot. And the only ipad available to the classroom runs out of charge (because there’s a problem with the powerpoint apparently and the new set of ipads for the whole class has not arrived yet).

Despite the effort of ICT to sabotage my prac, we were able to win some battles (but not the war) and successfully implemented ICT in the class. Who could envisage that a computer game could prove to be such a valuable and engaging hands-on learning experience? My mind boggles.

And yes, I admit it. ICT can be a fun and rewarding learning tool for both the teacher and the student. 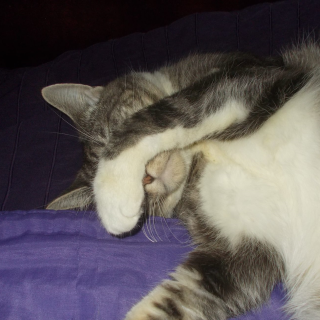 This is not my real name - I'm fake! Trying to protect my identity and reduce my online footprint as I plod my way through a primary teaching degree. Gnarly is surfie slang which can mean "difficult, dangerous or challenging" and Ngerti is Indonesian for "understand". I thought it appropriate for my adventure into ICT (as is my KuKu cat hiding under his paws is how I feel sometimes engaging with ICT).

- Learning is a continuous process -

The Blog for Education

A collection of reflections, observations, research and new learning in relation to the use of ICTs in education.

Me as a Uni student

Just one of my many hats...

Engaged In Education
The Running Dad

Getting switched on with ICTs

... part of my teaching journey

My Journey Through EDC3100!

A Techblog for All Ages

Enjoy reading my blog about surviving 3100!

My journey into ICT possibilities in special education.

The outlined effects of a course Blog

My name is James, I've never been one to make a blog in their own time, however I am someone who has romanticised the idea before. A blog for a course.

Learning in the Early Years

Children Learn and Pick Up New Things From Everywhere Everyday